(1) Party’s Statement. Any party may file, or a court may require by local rule, a statement explaining why oral argument should, or need not, be permitted.

(2) Standards. Oral argument must be allowed in every case unless a panel of three judges who have examined the briefs and record unanimously agrees that oral argument is unnecessary for any of the following reasons:

(A) the appeal is frivolous;

(B) the dispositive issue or issues have been authoritatively decided; or

(C) the facts and legal arguments are adequately presented in the briefs and record, and the decisional process would not be significantly aided by oral argument.

(b) Notice of Argument; Postponement. The clerk must advise all parties whether oral argument will be scheduled, and, if so, the date, time, and place for it, and the time allowed for each side. A motion to postpone the argument or to allow longer argument must be filed reasonably in advance of the hearing date.

(c) Order and Contents of Argument. The appellant opens and concludes the argument. Counsel must not read at length from briefs, records, or authorities.

(d) Cross-Appeals and Separate Appeals. If there is a cross-appeal, Rule 28.1(b) determines which party is the appellant and which is the appellee for purposes of oral argument. Unless the court directs otherwise, a cross-appeal or separate appeal must be argued when the initial appeal is argued. Separate parties should avoid duplicative argument.

(f) Submission on Briefs. The parties may agree to submit a case for decision on the briefs, but the court may direct that the case be argued.

(g) Use of Physical Exhibits at Argument; Removal. Counsel intending to use physical exhibits other than documents at the argument must arrange to place them in the courtroom on the day of the argument before the court convenes. After the argument, counsel must remove the exhibits from the courtroom, unless the court directs otherwise. The clerk may destroy or dispose of the exhibits if counsel does not reclaim them within a reasonable time after the clerk gives notice to remove them. 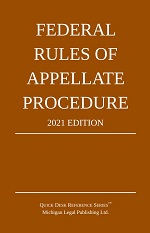